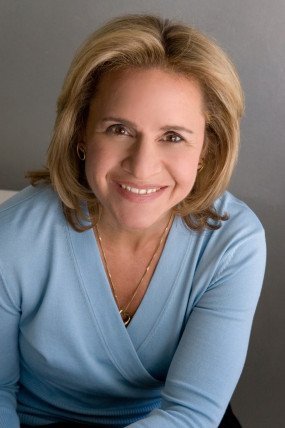 Cantor Deborah Katchko-Gray grew up in a distinguished family of cantors. A fourth generation cantor and the second to serve a Conservative congregation, Deborah founded the Women Cantors’ Network in l982 to help share the love of cantorial music she grew up with. At Boston University her studies with Prof. Elie Wiesel z’l’ convinced her that continuing in this family tradition was the best response for Jewish survival.

Since 1999, Deborah has served Congregation Shir Shalom of Westchester and Fairfield Counties in Ridgefield, CT and is active in the greater community. Deborah created a Music Shabbat series that brings guest artists on a regular basis enriching the choir and congregational experience in worship, a complete music curriculum for the religious school, Tot Shabbat music, cultural arts including classical concerts, author/luncheons, Huck embroidery of tallitot , and life-cycle involvement have been important parts of her cantorate. Her congregation honored her for her 10th, 13th and 18th years.

Her ten recordings include Passover Seder Songs, Hanukkah Songs of Light and Hope, A Cantorial Reunion- from Kalisz to California, Spirited and Soulful, Kindersongs, Jewish Soul, Shabbat Jam, A Suite Shabbat, and A Sacred Spirit. The Cantors Assembly included her recordings in the Spirit of Israel , Spirit of Hanukkah ,Spirit of the Jewish Wedding, Jewish World, Jewish Children’s Music, and Spirit of Peace CD series. Her rendition of Jerusalem of Gold was selected for The International Jewish Songbook recording. Her CDs are heard on Jewish radio stations throughout the country and are available at cdbaby.com, oysongs.com and cantordebbie.com. Her recording and companion songbook, Katchko Three Generations of Cantorial Art is being used at the School of Sacred Music at Hebrew Union College. It is the first cantorial songbook with guitar chords in a female friendly key!

Cantor Katchko-Gray served on the Executive Council of the Cantors Assembly, and is treasurer of the CT Region Cantors Assembly. She currently serves on the Clergy Task Force of Jewish Women International and is Founder and Past President of the Women Cantors Network. Founded in l982 the WCN has a diverse membership reaching 250 members. She is an Associate Member of the American Conference of Cantors, and served on the Liturgy Task Force. She helped found a chapter of the Pomegranate Guild of Judaic Needlework in Fairfield County. She is an active writer with Lilith Magazine, Forward Scribe Writers, and Primer of CT- Israel Advocacy in Media. She is a blogger for The Times of Israel, and a founding member of Women Fighting AntiSemitism #WMFA. She is also on the Chasing Light Speaker’s Bureau.

Deborah’s story is included in The Invisible Thread- A Portrait of American Jewish Women. She also teaches huck embroidery for making tallitot .The first book of Jewish Huck Embroidery was published in honor of Deborah’s tenth year at Temple Shearith Israel, now Shir Shalom. She published a book on her Jewish Huck called, Prayerful Creations in 2019. Deborah is a cellist with the Danbury Symphony Orchestra and the Allegro Chamber Players.

Her story about reuniting with her cousin, Cantor Leopold Szneer, a Holocaust survivor and cantor in Beverly Hills was recorded for National Public Radio’s Yom Hashoah program, April 21, 2009 ”The Story”.  The national Jewish tv, JBS has her program, Songs and Stories of Elie Wiesel (2019) in it’s archives.

Her archives of interviews, articles and recordings are now part of the American Jewish Archives as well as the National Museum of American Jewish History in Philadelphia. Two items of Deborah’s are installed permanently in the museum in Feminism and Personal Observance. Her papers on Elie Wiesel are housed at the Mugar Library, Boston University Elie Wiesel Collection.

She is the mother of four sons, David, Aaron , Ezra and Joey, two stepsons Justin and Rannon and two grandchildren Eli and Ella! She is married to Dr. F. Scott Gray, of Somers Orthopedics. 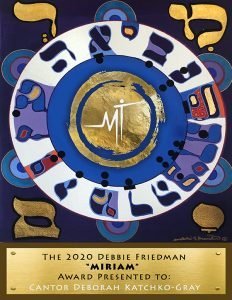 Ari and Darren Leva
This edition marks one of the most innovative, important, and creative blending of guitar and Jewish music. It surely will not take away from those Cantors who wish to chant either capella, or with piano or organ, but for those Cantors skilled in playing guitar, this will be a loving and long lasting companion which, I am sure, will touch the hears and souls of the next generation of Jews to hear this incredible music.
Rabbi/Cantor Jon Haddon
If your tastes run to such classics as Yerushalayim Shel Zahav and you enjoy everything from Sephardic to Yiddish to contemporary pop, Katchko’s soprano renditions and acoustic rhythms are the perfect musical menu for you. Her inspiring version of , ” The Place Where I Belong” will have you singing along.
Hadassah Magazine
Finding Family Through Song”- A Story – The presentation given by Cantor Katchko-Gray of Temple Shearith Israel of Ridgefield, CT on Thursday October 29th, 2009 was a remarkable presentation. This was an inspiring and moving story of music, faith and family beautifully told. We think it was definately one of the very best programs that the Mary Brewster Fund has offered!
Zayne McFarlane
I’ve listened to a lot of traditional Jewish holiday song recordings and most, for one reason or another should not have been made. But, this one is significantly different. First, Deborah Katchko has a warm, rich voice. Second, she sings honestly. What do I mean? There are no tricks to this recording, just Deborah and her guitar and she’s making music. Third, she includes 25 ethnic songs full of information and history. This is a Hanukkah gift for the entire family.
Washington Parent
I am almost without words to say how much I enjoyed your concert at Beth El on Saturday night. You are so multi-talented and you have a beautiful radiant quality that truly glows and really touched me. I was impressed with your story telling and also with the way you shared your personal experiences and your family with us. I hope I have the opportunity to see you and hear you again! WOW-thank you !
Susan Pomerantz

Jessica (Moll) and Derek Sanderoff
In telling her story of living history and astonishing discovery, Cantor Deborah Katchko-Gray brings to life the love and faithfulness of holocaust survivors and the generations who remember them. People of faith will be embraced by Cantor Debbie’s generous spirit, learn first hand about the important of remembrance and rekindle their hope for a peaceful world.
Reverend Marc Delcuze
Katchko-Gray can reproduce “ that old sound” by calling on melodies she received personally in true oral tradition.
Scales Out of Shul May 2007

Hazzan Alan Smolen
Deborah Katchko is such a wonderful gift to our festival!
Berna Hayden
National Children’s Choir Director
We are all indebted to Deborah Katchko Gray for this new publication which will preserve her grandfather’s music, complete with modern innovations, for generations to come to grateful practitioners of the art of HAZZANUT.
Hazzan Jacob Ben Zion Mendelson
Connecticut based Cantor Deborah Katchko has wide appeal. With a strong and soulful voice, she covers a broad range of songs in several languages, exposing us to Jewish culture from various times and places.
Boston University Alumni Magazine
Nurturing our family’s Jewish identity is an art, rather than a science. Fortunately people like Deborah Katchko can help. Her three cds offer a rich array of traditional and contemporary Jewish music suffused with her warm and welcoming spirit.
Jewish Woman Magazine
One of our most successful Scholar – In – Residence programs ever ! She brings an accomplished voice, and a lively spirit that will fill your synagogue with music and joy. Cantor Debbie led Friday night and Shabbat morning services and a sing-along program for children and adults on Sunday morning. Her music, voice and personality enchanted all of our members.
Rabbi Martin I. Sandberg
Your American Jewish Songbook selections were a perfect blend of English, Yiddish and Hebrew-appreciated by all. Your stage presence and hamische introductions of hte band and the songs added and extra measure of charm to the beauty of your voice and the wonderful sounds of your group. Your lead guitarist David, and the pianist were particularly outstanding……we were all blown away by the warmth and family feeling you created on our stage/bimah.!!
Steve Stein, MD

Regarding Shabbat Jam and Hanukkah Songs of Light and Hope
Larry S. Kaplan ( ASCAP)
If a teacher had but one student- you- it would be Dayenu!……your songs bring joy to my heart!
Elie Wiesel

Tracy Daniels
Director Women’s Philanthropy / Program Manager, PJ Library / UJA Greenwich, CT
I find you to be a first-rate hazzan and a consummate artist…your cds are a shining example of what we should aim to emulate.
Cantor Pinchas Spiro (of blessed memory)
Thank-you again for a wonderful concert- Inspiring, beautiful and fun!
Alan Feld
Just this morning, we were privileged to have our colleague, Deborah Katchko-Gray, as our guest artist/scholar at my temple in Amenia, New York. In addition to her co-officiation with me at the worship service, she presented the program, “Gems of my Grandfather: Music, Ideas, and Visions of Cantor Adolph Katchko,.” as part of our adult education. Although almost all of us have been deeply influenced by the music of Adolph Katchko, Deborah added a dimension of insight, examples I have never heard before, and even a duet of “Adonai Malach” which was truly inspiring. I would wholeheartedly urge you to consider Deborah as a scholar-in-residence or a guest lecturer. The congregation could not have been more moved or appreciative of this excellent program.
Rabbi/Cantor Jon Haddon